Add your review
Toys and Games

Play Like a PIRATE: Engage Students with Toys, Games, and Comics

Added to wishlistRemoved from wishlist 0
$15.21 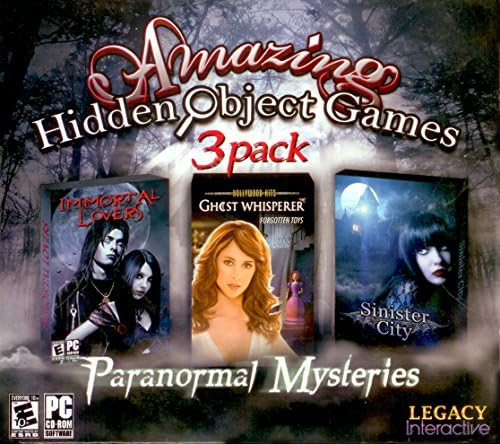 Includes The Ghost Whisperer: A Brush with Death, Immortal Lovers, and Sinister City
Inspired by the popular TV series “Ghost Whisperer,” take on the role of Melinda Gordon, who has a special gift…communicating with the spirits! Help ghosts with unfinished business to “cross over” into the light. “A Brush With Death” tells the story of a ghost haunting the Grandview Art Museum shortly after a very special painting is put on display. This hidden object, light adventure game is spooky yet heartwarming, and fun for everyone!
A run-of-the-mill family vacation turns into an adventure of a lifetime for young Valerie. During a walk in the woods, she narrowly escapes the attack of a wolf and is rescued by a mysterious stranger. When she returns to the woods to retrieve the items she lost, Valerie discovers a secluded mansion. There she meets the charismatic Vincent, and is instantly drawn to him. But Valerie has no idea what dark secrets are in store for her in this thrilling adventure.
In Sinister City, you’ll go in search of his kidnapped bride the main character John arrives to mysterious Sinister City full of horrible rumors and inhabited by vampires. He finds out that his bride-to-be’s kidnapped by the most powerful and terrible vampire in Sinister City count Orlok. Prepare to travel to the astral plane, ancient castle corridors and many other places!